Toronto – Folly Brewpub said today their two founding brewers – Christina Coady and Chris Conway – will depart from the brewery at the end of 2017 returning home to Newfoundland.

“We’ve always been asked about when we’d want to make the trip home to try something near to our families,” Conway explains, “and with the growing industry in Newfoundland, 2018 is the year that we want to try build something closer to home.”

Coady and Conway have began working with Folly in 2014 when it was known as Habits Gastropub, and later relaunched as Folly Brewpub in 2015.

Taking over brewing operations at Folly is John Jenkinson, a long-time homebrewer and brewer in London.

“John is the right person to continue the beer direction of Folly,” says Conway, “we couldn’t be happier passing off the brewing responsibilities to another established homebrewer with some great ideas for new Folly brands.”

Jenkinson has already been working directly with Coady and Conway to begin the transition. 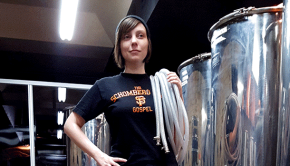